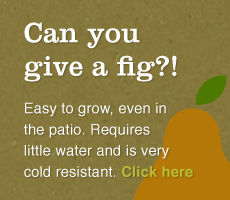 It may seem obvious, but I want to start off by saying that a good healthy fruit garden will deliver you good and bountiful crops - quite often without disease or pest damage. I say obvious but this isn’t always the case judging by the number of questions I get from gardeners complaining about crop failure or damage. On a closer look it generally is always the case that proactive measures have not been considered. So, what am earth am I talking about?

What I mean when I say good garden health includes simple and easy measures such as ensuring that fallen and decaying leaves and fallen or damaged fruits are removed as soon as possible, weeds are not allowed to grow, and that broken and dead wood is removed from trees. You never know just what can be hiding under a pile of leaves and weeds or what fungus spores decaying leaves and damaged fruit are carrying. For example, apple scab overwinters on fallen leaves, codling moth caterpillars live in fallen apples and pear midge grubs live in fallen pear fruitlets. So, to have good crops during the growing season vigilance is vital to spot early signs of pests or diseases or opportunities for these to remain on the ground. 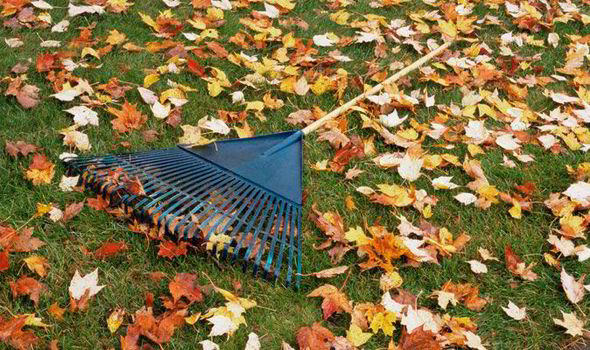 Incidentally a first step in garden hygiene management - and as noted in my previous blog about planting - it is essential that all weeds are removed before planting commences. If these can be eradicated at an early stage subsequent weed management will become easy as you continually look to remove any weeds growing near your fruit. These weeds will not only compete for valuable nutrients and water in times of water shortages but can harbour pests and diseases.

So, let’s consider more detail. As soon as you see any damaged or diseased fruit or fruitlets lying on the ground remove them immediately and bag them up preferably the bag to your local tip. The same applies to any damaged fruit that you see on the trees or plants themselves. Brown rots and mildews quickly spread - particularly in strawberries and plums - and left unattended whole crops can be quickly lost. Again, vigilance is critical. At the end of the growing season when fruit trees and bushes have dropped their leaves collect them up and bag them for offsite removal. Never try and compost decayed fruits and damaged fruit tree leaves as it is often hard to achieve the hot enough temperatures to destroy the various bacteria. If you can’t get to the tip burn everything.

In autumn time after leaf fall and when you have gathered up all the leaves give the slightest of rakes to the bare ground below the trees and plants and this will encourage birds to peck around and unearth any grubs which are looking to overwinter in the soil. In the case of strawberry plants remove any obviously decaying leaves during the season making sure that the leaf is removed right back to the stem.

Regularly monitor the branches of fruit trees as damaged wood can allow bacteria and disease to enter particularly in the case of stone fruit trees. Large, heavy birds love to perch on fruit trees, and this can often harbour pests and diseases, but they can break branches or strong winter winds can do similar. In the case of apples, currants, gooseberries and pears you can cut back to clean wood as soon as you discover the damage. In the case of cherries, nectarines, peaches and plums do no more other than to tidy up a break except during the growing season (March to September) when the sap is rising. Cutting back wood of these trees whilst the sap is not rising increases the chance of diseases such as silverleaf and bacterial canker entering the tree. Natural dieback can affect many plants, particularly cherries, currants, gooseberries, nectarines, peaches and plums which can eventually cause whole branches to die. Cut back to healthy wood as soon as the dieback is noticed and as the season allows and destroy the diseased wood. 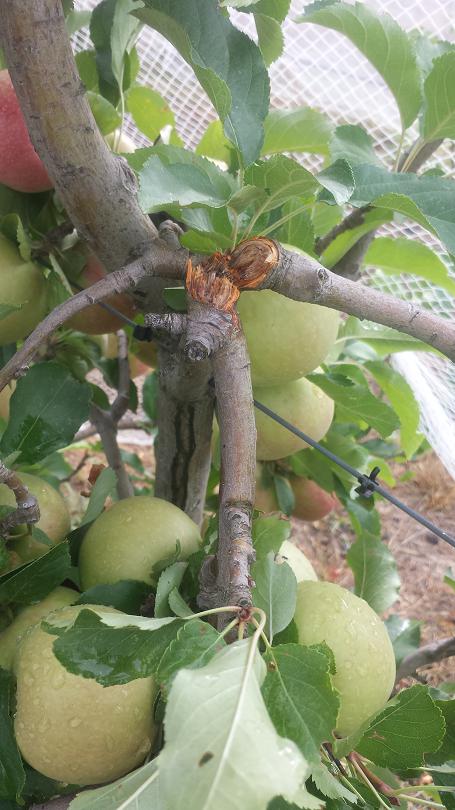 During the growing season plant and tree health can be maintained by vigilance once again. If pests and aphids can be kept at bay and controlled trees and plants will perform and grow well. As soon as aphids are spotted, they should be removed by as soon as possible. The aphids may be of any colour and these include the woolly aphid which appears as patches of “cotton wool” in crevices of trees - all can be wiped off by hand or washed off by a jet of water. Caterpillars eating away at leaves, most commonly gooseberries and redcurrants, can be picked off by hand and the same applies to slugs and snails attacking strawberries. Pear midge causes the small black pear fruitlets which eventually fall off the tree - these should be removed as soon as they are noticed along with any that are on the ground and should be destroyed. The round, fat buds found on blackcurrants is caused by the blackcurrant big bud mite and should be picked off and destroyed.

Mildew in apples and gooseberries is fairly common and usually affects blossom and young shoots - cut off the affected shoots and blossoms and destroy as soon as possible. As noted earlier mouldy fruits and rotten fruits should be removed as soon as possible or the disease will quickly spread. Peach leaf curl can be minimised by covering fan trained peach and nectarine trees in December with a polythene structure to prevent the shoots getting wet which encourages the fungus to develop. The covers can be removed in May and a byproduct of this is that the microclimate under the polythene will have encouraged a good fruit set. Any leaves affected by curl should be picked off and bagged up for disposal. 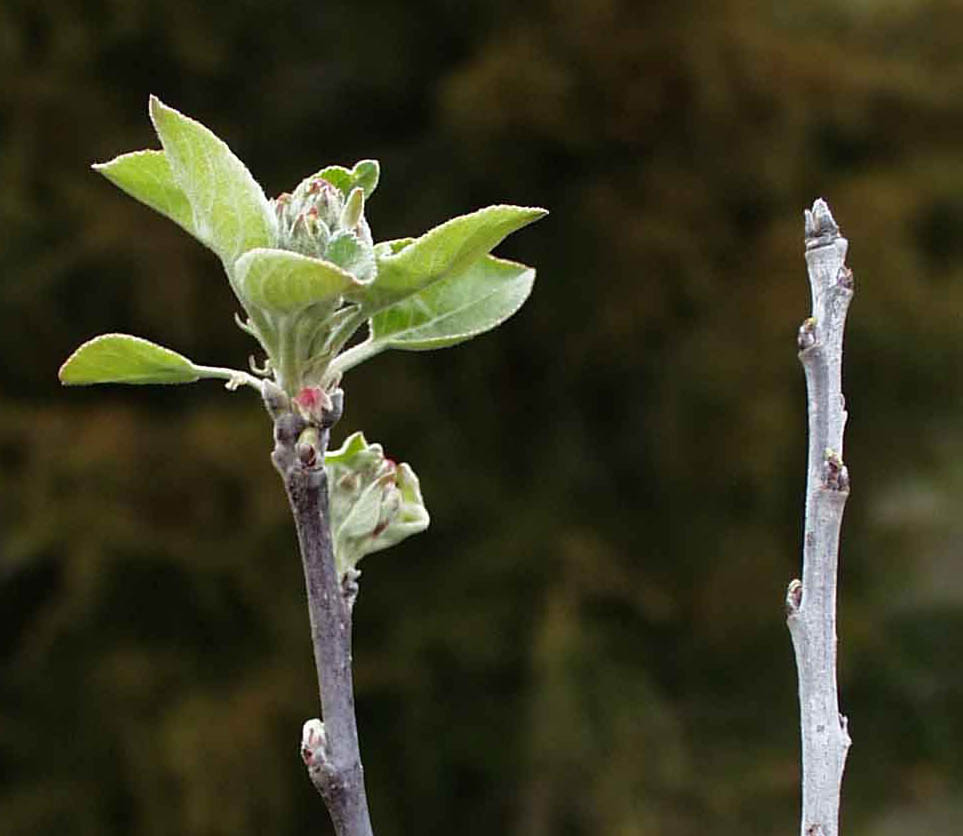 Although it is best for nature to strike a balance there are occasions when pests can become a bigger problem particularly if aphid and caterpillar populations build up too quickly. In the case of aphids insecticidal soap applications can be sprayed onto dense populations although I would encourage the hose blast first! Where caterpillars are denuding redcurrant and gooseberry plants and it is impossible to pick them all off “organic” sprays can be used sparingly but keep well away from bees and beneficial insects.

There are other pests which can be controlled without the use of chemicals. Codling moth which burrows through apples can be controlled with the use of pheromone traps as can the plum tree fruit moth - hang the plum moth traps out in February and codling moth traps out in early April. Winter moths climb trees in late autumn in order to lay their eggs; these can be simply controlled by applying a layer of horticultural grease applied directly to the trunk itself in September. Sadly, there is no current organic control for pear midge. 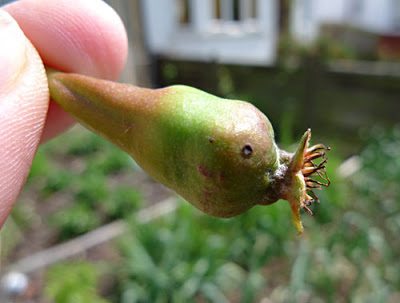 Finally, a very important way of keeping fruit tree and plants healthy is to feed them at the beginning of the growing season so that they start off in peak condition. A good handful of blood, fish and bone should be scattered at the base of trees and plants in March and September and just very lightly forked in. Do not use this for blueberries and cranberries as it will be too acidic so in the case of these plants use a leafy mulch.