A guide to choosing the right size

Blackmoor Nursery is one of very few Nurseries in the UK offering gardeners the opportunity to buy Blackberry plants direct from our Nursery.

All orders are despatched in one delivery. If your order contains both bare root and container grown plants then we can only despatch when all plants are ready.

3 Litre = Container grown and can be planted all year round. The size refers to the number of litres of compost that the container holds. 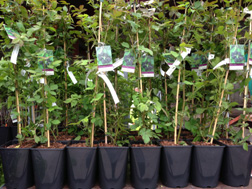 Subsequently pruning is similar to raspberries, canes that have fruited are cut out immediately after fruiting.

If blackberry plants are in waterlogged soils for more than a few days at a time, they normally die a slow death from lack of aeration (oxygen) or from subsequent attack by root diseases. 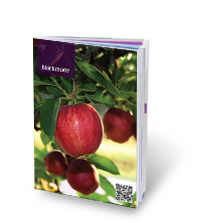 Collection - If you would like to collect your trees then use this option. Note the collection is from the Wholesale Nursery office between Monday-Friday only. Please allow 1 working days for your order to be processed prior to collection date.

We are not a Garden Centre or retail Nursery. Orders can be placed via our website and the collection option can be selected at the checkout. Your order will then be ready for you to collect during our normal opening hours which are Monday-Friday 07.30-16.30. Our plants are grown in fields that can be 2 miles away from our office so it is not possible to just turn up and select your own trees.

Delivery Charges - The delivery charge is worked out from the weight and the size of the plant. We have several rates that apply to UK mainland addresses. The lower postal rates range from £2.80 - £5.70, will be applied to smaller orders of the lighter plants like Bare Root (Not Potted) currants, raspberries, gooseberries, asparagus and strawberries although larger orders will go into the £10.00 rate. A higher rate of £18.00 - £32.00 will be charged for deliveries to European Countries and GY KW IV AB PH KW HS ZE IM BT DD JE PO30 PO31 PO32 PO33 PO34 PO35 PO36 PO37 PO38 PO39 PO40 PO41 Postcodes. Once you have put together your order the delivery charge will show before payment. All orders are despatched in one delivery.

To take advantage of a promotional code or gift voucher this must be entered into the redeem code box at the checkout. Discounts cannot be given once an order is completed and any codes have not been used. 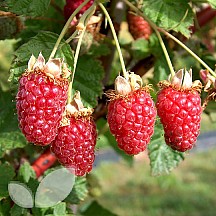 1 Blackberry Bigandearly Thornfree - An upright growing blackberry which is perfect for the patio. As the name suggests this blackberry crops early and boasts large juicy fruit. The large, sweet and aromatic blackberries are produced in abundance from early July to August.

1 Loganberry Thornless LY654 - The Loganberry is a cross between a Raspberry and a Blackberry. The fruit is dark red in colour and longer than a Raspberry. It is juicier but has a sharper flavour than Raspberry. The fruit ripens over a long period from July to August. For best flavour it should be allowed to fully ripen to a dark red colour before picking. Loganberries are best used for jams and summer puddings but can also be eaten fresh.

1 Buckingham Thornless Tayberry - The most exciting new hybrid berry for many years. A tayberry without spines. Identical in every respect to the original tayberry, except the canes are smooth. Cropping time late July to August.

All grown in a 3 litre container.

This collection saves you £3.80

3 fantastic heathy looking plants arrived as stated by the courier in their two hour time slot. Out the box, watered and in their new home the next day up the allotment for the Loganberry and the Tayberry and the Bigandearly is waiting for the ground to condition in our garden. Great service thank you!

First class plants delivered. All looking so green and healthy. Arrived in great condition. Very happy with this super collection and will be back for me when I make some more space in the garden.